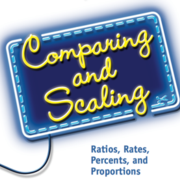 Students investigate the pattern of bounces for a pool ball as it makes its way around pool tables of various dimensions. As you might expect, ratio and scaling are involved in this Project. For a pool table with given dimensions students predict the number of times the ball “hits” the sides of the table and which of the four pockets it will fall.

Materials Needed to do the experimentation digitally

Materials Needed to do the experimentation with paper & pencil

1. Understand the concept of a ratio and use ratio language to describe a ratio relationship between two quantities.

a. Make tables of equivalent ratios relating quantities with whole- number measurements, find missing values in the tables, and plot the pairs of values on the coordinate plane. Use tables to compare ratios.

b. Solve unit rate problems including those involving unit pricing and constant speed.

1. Compute unit rates associated with ratios of fractions, including ratios of lengths, areas and other quantities measured in like or different units.

b. Identify the constant of proportionality (unit rate) in tables, graphs, equations, diagrams, and verbal descriptions of proportional relationships.

3. Use proportional relationships to solve multistep ratio and percent problems.