Data Project: Analyzing the Data and Interpreting the Results 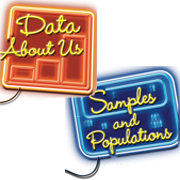 1. Understand the concept of a ratio and use ratio language to describe a ratio relationship between two quantities.

1. Recognize a statistical question as one that anticipates variability in the data related to the question and accounts for it in the answers.

2. Understand that a set of data collected to answer a statistical question has a distribution which can be described by its center, spread, and overall shape.

4. Display numerical data in plots on a number line, including dot plots, histograms, and box plots.

5. Summarize numerical data sets in relation to their context, such as by:

3. Informally assess the degree of visual overlap of two numerical data distributions with similar variabilities, measuring the difference between the centers by expressing it as a multiple of a measure of variability.

4. Use measures of center and measures of variability for numerical data from random samples to draw informal comparative inferences about two populations.