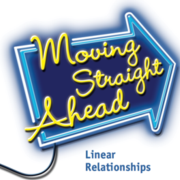 Students collect data about the rate at which a leaking faucet loses water.  Students make predictions based on their data.

a. Make tables of equivalent ratios relating quantities with whole- number measurements, find missing values in the tables, and plot the pairs of values on the coordinate plane. Use tables to compare ratios.

Represent and analyze quantitative relationships between dependent and independent variables.

9. Use variables to represent two quantities in a real-world problem that change in relationship to one another; write an equation to express one quantity, thought of as the dependent variable, in terms of the other quantity, thought of as the independent variable. Analyze the relationship between the dependent and independent variables using graphs and tables, and relate these to the equation. For example, in a problem involving motion at constant speed, list and graph ordered pairs of distances and times, and write the equation d = 65t to represent the relationship between distance and time.

For example, if total cost t is proportional to the number n of items purchased at a constant price p, the relationship between the total cost and the number of items can be expressed as t = pn.

Understand the connections between proportional relationships, lines, and linear equations.

2. Know that straight lines are widely used to model relationships between two quantitative variables. For scatter plots that suggest a linear association, informally fit a straight line, and informally assess the model fit by judging the closeness of the data points to the line.

3. Use the equation of a linear model to solve problems in the context of bivariate measurement data, interpreting the slope and intercept.

For example, in a linear model for a biology experiment, interpret a slope of 1.5 cm/hr as meaning that an additional hour of sunlight each day is associated with an additional 1.5 cm in mature plant height.