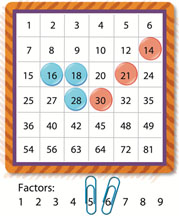 This is a two-player or two-team game.

The game involves a paper board with the numbers listed on a six by six grid. The numbers are all of the products of the factors shown at the bottom of the board. Players take turns moving one of the pointers (paper clips) on the factors. The product is then covered or circled on the board. The first player to have four in a row wins.

As the game is played several times, students look for patterns to make better choices for choosing a number.

In the process, they are developing and reinforcing their knowledge of multiplication and division as inverse operations, factors, and products. Analyzing the game can also reinforce their understanding of basic number theory including prime and composite numbers, abundant and deficient numbers, and square numbers. If playing with the integer game board, students practice multiplying and dividing with negative and positive numbers.

Analyze the products on the board. How do you get each product on the game board? Why are some numbers between 1- 81 missing on the board? Is there a good first move? What are helpful strategies?