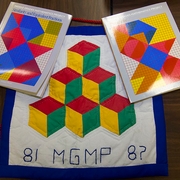 CMP is based on prior experiences of Lappan and Phillips with the Middle Grades Mathematics Project (MGMP). In the 70s Lappan and Phillips and their colleagues, William Fitzgerald and Mary Winter created five mathematics units, each centered around an important mathematical idea. These units were designed to engage students in large problem situations that were engaging, challenging, and educative. For several years during the 70s and 80s, the MGMP author team continued to study how teachers made the transition from direct instruction to inquiry-based teaching and learning. The focus was on reasoning and sense making of important mathematical concepts and skills. The MGMP units and professional development came at a time when the country was reacting to an over emphasis on skills and not enough emphasis on problem solving and understanding.

In 1983 A Nation at Risk [1] claimed "… the educational foundations of our society are presently being eroded by a rising time of mediocrity that threatens our very future as a nation and a people." This report stimulated the National Council of Teachers of Mathematics (NCTM) in 1989 to create the Curriculum and Evaluation Standards for School Mathematics. After the release of these Standards, the National Science Foundation (NSF) put forth a call for K-12 mathematics curriculum. In 1990, Lappan, Fitzerald, Phillips and James Fey from the University of Maryland and Susan Friel from the University of North Carolina received NSF funds to develop CMP1. By 1996 CMP1 was in schools. In 2000, NCTM published an update of the Standards, called Principles and Standards for School Mathematics. Again the CMP author team received NSF funds to revise the curriculum based on these Standards. In 2010 the Common Core State Standards for Mathematics (CCSS) were released. The CCSS were incorporated into CMP3, which was published in Fall 2013.

The authors' early experiences of curriculum writing, professional development and extensive collaboration with K-12 teachers and the reports described earlier provided the base for developing CMP. CMP1 authors began by working with an advisory board to articulate goals for what a student exiting 8th grade would know and be able to do. Papers were written for each of the strands, number, algebra, geometry, measurement, probability, and statistics that described these goals in more detail. These papers became the touchstone for the development of CMP1, CMP2, and CMP3. For more details on the early development of CMP see A Designer Speaks: Challenges in US Mathematics Education through a Curriculum Developer Lens, by Glenda Lappan and Elizabeth Phillips. Educational Designer Issue #3

[1] National Academy of Sciences. (1983). A Nation at Risk: The Imparative for Educational Risk. Washington, DC: NAS.