7-1 Shapes and Designs - Concepts and Explanation 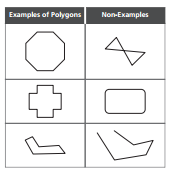 Polygons whose side lengths are equal and interior angle measures are equal.

If the polygon is folded over the line of symmetry, the two halves of the shape will match exactly.

A polygon with turn symmetry can be turned around its center point less than a full turn and still look the same at certain angles of rotation.

Angles are figures formed by two rays or line segments that have a common vertex. The vertex of an angle is the point where the two rays meet or intersect. Angles are measured in degrees.

The need for more precision requires techniques for measuring angles. Students use an angle ruler or protractor to measure angles.

Parallel lines and transversals help explain some special features of parallelograms such as the opposite angles have equal measures or that the sum of the measures of two adjacent angles is 180°.

Polygons that Tile a Plane

For regular polygons to tile a plane, the angle measure of an interior angle must be a factor of 360°.

Only three regular polygons can tile a plane: an equilateral triangle (60° angles), a square (90° angles) and a regular hexagon (120° angles). There are also combinations of regular polygons that will tile, such as 2 octagons and a square.

The sum of two side lengths of a triangle must be greater than the 3rd side length.