7-5 Moving Straight Ahead - Concepts and Explanations

In the table, the constant rate of change can be observed as a pattern of consistent change in the variables.

For Gilberto’s walking rate, as the time increases by 1 second, the distance increases by 2 meters. The constant rate of change is 2 meters per second.

In the symbolic representation, the constant rate of change shows up as the coefficient of the independent variable.

On a graph, the y-intercept is the point at which the graph of a line crosses the y-axis (vertical axis). 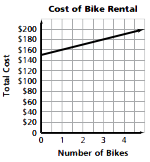 Suppose the cost to rent bikes is $150 plus $10 per bike. Symbolically, we can write C = 150 + 10n, where C is the cost in dollars and n is the number of bikes. They y-intercept is at (0, 150) because for 0 bikes, the cost is $150. This means there is a fixed charge in addition to the cost per bike. The y-intercept is the constant term in the equation. The slope (or constant rate of change) of the line is 10, the coefficient of n.

To solve an equation, students write a series of equivalent equations until it is easy to read the value of the variable. Equivalent equations have the same solutions. Equality is maintained by adding, subtracting, multiplying, or dividing by the same quantity on each side of the equation. For multiplication and division, the quantity must not be zero. These procedures are called the properties of equality

Note that if you replace n with 60 in each step, the equation is true. For example, the original equation simplifies to 750 = 750.