An equation or a graph that describes the relationship between two variables. A mathematical model is made by graphing data and finding an equation or a curve to approximate it. A model lets you estimate values between and beyond the data points.

Models that can be written in the form y = kx.

Students are familiar with direct variation as a special case of a linear function (that is, those with a y-intercept of zero). 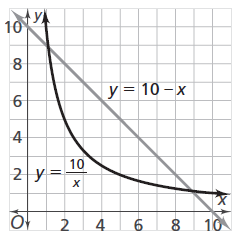 Patterns of Association in Numerical Data

Scatter plots can be used to model association between two quantities. Students describe patterns such as clustering, outliers, positive/negative association, and linear/nonlinear association. For linear data, students write a linear model and assess the fit of the model by judging the closeness of the data points to the line.

Patterns of Association in Categorical Data