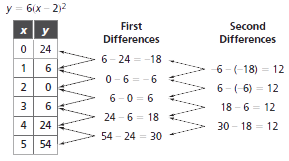 The second differences are all 12, which indicates that the table represents a quadratic function.

Traditionally, quadratic functions are defined as functions that have equations fitting the form y = ax2 + bx + c, in which a, b, and c are constants, and a ≠ 0. This form of the equation is called the expanded form. The emphasis is on observing that the equations contain an independent variable raised to the second power. While this is a useful definition, it is also important to understand the factored form of such equations.

Quadratic equations arise from situations that have an underlying multiplicative structure, such as the area of rectangles. Thus, many quadratic equations can also be defined as functions whose y-value is equal to the product of two linear factors—the form y = (ax + c)(bx + d), where a ≠ 0 and b ≠ 0. The power of this form is that it ties polynomials together as products of linear factors. The two factors for the factored form of a quadratic expression are also called binomial expressions, or binomials. It is an expression with two terms.

The values in the equation affect the shape, orientation, and location of the quadratic graph, a parabolic curve. 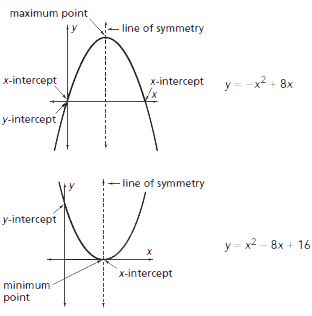