Comparing Bits and Pieces and the CCSSM Algebra

Exponential notation is used in place value thinking required by Investigation 3 and is explicitly introduced in Problem 3.3, p. 71.

For a fundraiser at a middle school, each grade’s fundraising progress is recorded on charts that look like thermometers.  The thermometers are all the same length, despite the different total goals for each grade.  Each thermometer is subdivided into 10 equal parts. 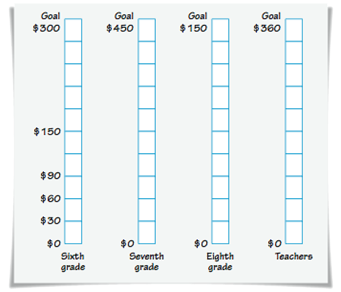 A)The principal labeled some of the marks on the four thermometers with dollar amounts. Decide what lbales belong on the remaining marks.

Do you agree with this claim? Explain your reasoning.

2. Use the thermometers to write two more for every claims that relate the fundraising goals.

Comparing Bits and Pieces Problem 1.3 (equivalent fractions): On the Line

C) Find decimal equivalents for each group of fractions.

Ordering and comparing rational numbers on a number line prepares students for later work with inequalities. 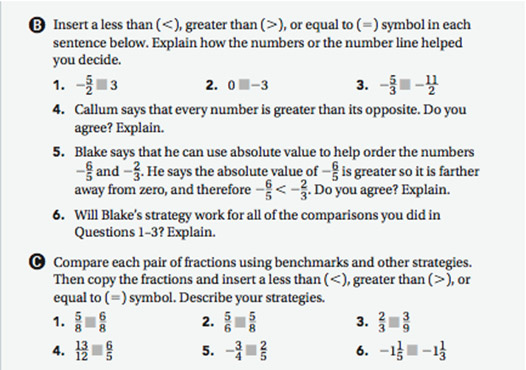 Comparing Bits and Pieces Problem 3.4: Decimals on the Number Line

F) Use your knowledge of fraction benchmarks and decimal place value to identify the greater number in each pair below. Use the grater than (>), less than (<), or equal to (=) symbols in writing your answers.

Thorough and explicit attention to the meaning of solving inequality equations does not formally occur until Variables and Patterns.  However, inequalities are introduced in Comparing Bits and Pieces 3.2 and 3.4 and can be extended to begin inequality reasoning.

Inequalities occur in Comparing Bits and Pieces in problems 3.2 and 3.4 (see above) and offer opportunities to give some introductory attention to solving an inequality.

For instance, in Problem 3.2, Part C, Number 5 asks students to insert < or > or = symbols to complete the number sentence -3/4 - 2/5. An easy extension of such exercises might ask students, “What values of x will make the sentence x < 2/5? Draw a number line to show this comparison.”

The work with ratio in Comparing Bits and Pieces prepares students for later work with linear equations.  For instance, Problem 2.3 introduces the idea of rate table and asks students to generate sample pairs of values for related variables. 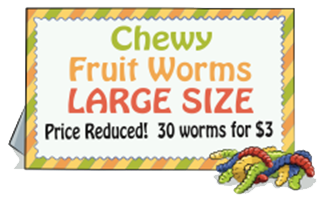