Covering and Surrounding and the CCSSM Algebra

Exponential notation is originally introduced in Prime Time, and it reinforced throughout in Covering and Surrounding when developing area and volume formulas. For instance, in Problem 4.2B, students discuss whether the formula for volume of a rectangular prism, V=LWH, works for a cube.

4. Dushane says that the formulas for Natasha's and Kurt's methods do not work for cubes because the volume of cube with side length l is l3. Do you agree with Dushane? Explain your reasoning.

Covering and Surrounding throughout the unit

Writing numeric and symbolic expressions and sentences to represent the operations required to solve problems is one of the most important skills in applied mathematics. Each unit of CMP3 includes many activities that develop understanding and proficiency in work on such modeling tasks.

Covering and Surrounding throughout

The mathematical vocabulary of sum, product, factor and quotient are introduced in earlier units and used in Covering and Surrounding.  The mathematical term coefficient is not defined or used until problem 3.1 of Variables and Patterns. However, it is easily possible to introduce the term “coefficient” in Covering and Surrounding where formulas like P = 4s, and P = 2L + 2W, and A=(1/2) BH all involve coefficients.

Use of the word term to indicate any part of an algebraic or numeric expression consisting of a number, a letter, or the product of a number and a letter is not made explicit in any unit of the grade six CMP3 curriculum, except in the glossary of Variables and Patterns. We have avoided any attempt to define term because of the inherent ambiguity in the idea itself.  For example, does the expression 5(n + 7) involve two terms, three terms, or only one term?

The many CMP3 exercises involving the distributive property, like reasoning that perimeter of a rectangle can be expressed in two equivalent ways 2(L + W) and 2L + 2W highlight the need to view parts of complex expressions as single entities.  In the case of 2(L + W), order of operations conventions imply that one has to calculate the sum of length and width before multiplying that single number by 2.

Covering and Surrounding throughout

Covering and Surrounding is the obvious place where students will develop skill in evaluating expressions for specific values, which occurs throughout the unit.

The fundamental concept of equivalent expressions is a big idea throughout the CMP curriculum. The distributive property is first introduced in Prime Time, and threaded throughout the rest of the CMP3 units.  For instance, in Covering and Surrounding, Problem 1.1, the distributive property is used in a powerful way to explain equivalence of two common formulas of the perimeter of a rectangle:  P = 2L + 2W and P = 2(L+W).

C. Riverview School orders a bumper-car ride in the shape of a rectangle for their fundraising festival. The MARS company sends the school Designs I, II, and III. 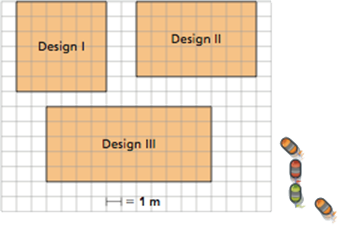 See above discussion of the distributive property and the equivalent forms for perimeter of a rectangle, P = 2L + 2W and P = 2(L+W).

Use variables to represent numbers and write expressions when solving a real-world or mathematical problem; understand that a variable can represent an unknown number, or, depending on the purpose at hand, any number in a specified set.

Covering and Surrounding Throughout

The use of letter variables to represent measurement values in the various geometric formulas occurs throughout Covering and Surrounding.

Covering and Surrounding, Problems 1.2 and 1.3

The rangers in a national park want to build several storm shelters. The shelters must have 24 square meters of rectangular floor space.

A) Experiment with different rectangles that have whole-number dimensions. Sketch each possible floor plan on grid paper. Record your data in a table such as the one started below. Look for patterns, and describe the data.

B) Suppose the walls are made of flat rectangular panels that are 1 meter wide and have the needed height.

An extension of each given problem could also ask students to express the relationship as an equation with letter variable names.