Decimal Ops and the CCSSM Algebra

Evaluating numerical expressions involving exponents occurs explicitly in the Prime Time unit. The place value thinking throughout Decimal Ops incorporates the idea of exponents as powers of 10 as introduced in Comparing Bits and Pieces. For instance, in Problem 2.1 students use what they know about fractions to compare and add decimals. An extension that would make this powers of 10 use and reasoning explicit would be to rewrite some of the expanded forms in Problem 2.1 to include exponential notation. For example, a third question could be added here such as, “What is the correct answer in fraction form using powers of 10 in the denominator?” This type of thinking may help students later on when they study scientific notation. 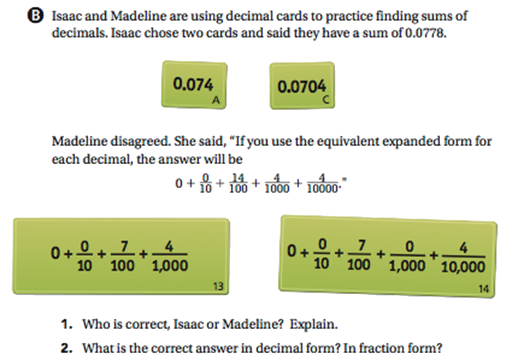 Decimal Ops Problems 1.1 and 4.3 plus extensions including variables.

Writing numeric and symbolic expressions and sentences to represent the operations required to solve problems is one of the most important skills in applied mathematics. Each unit of CMP3 includes many activities that develop understanding and proficiency in work on such modeling tasks. Problems 1.1 and 4.4 of Decimal Ops incorporate modeling tasks. 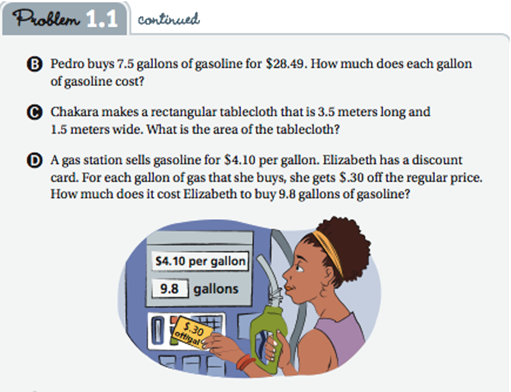 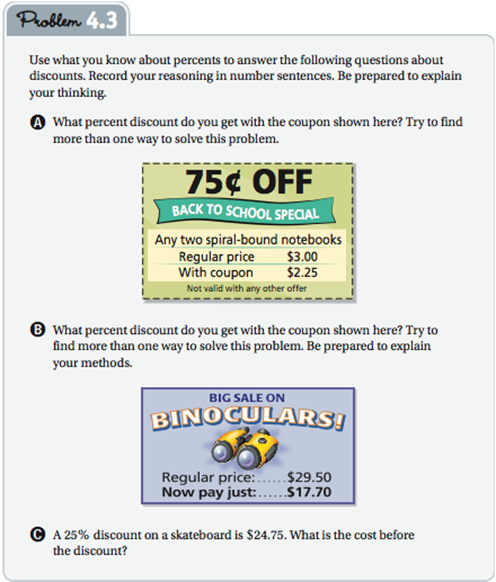 Understandings and skills used in writing numeric expressions and equations are also extended to use of letter names for variables in several other problems of Decimal Ops.

he mathematical terms sum, product, and factor are introduced early and used throughout Decimal Ops. The term quotient is defined and used in development of the decimal division algorithm in Decimal Ops Investigation 3, p. 48, and is used consistently throughout.

The calculation 18 divided by 3 equals 6 can be written like this:

You can also write the above calculation in two other ways: 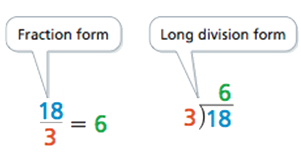 The obvious place where students develop skill in evaluating expressions for specific values of their variables is the measurement unit Covering and Surrounding. However, there are also opportunities in other CMP3 units. For example, Investigation 4 of Decimal Ops is all about applications of percents in which students are asked a variety of questions about sales tax and discounts on purchases. In answering those questions they are implicitly writing general formulas for calculating such taxes and discounts and then using the formulas in a number of specific cases. To more explicitly satisfy CCSS 6.EE.2a and 2c, you could ask students to write general formulas using letter names for variables and then ask them to show how to use those formulas in specific cases. Refer to the examples below for ideas on how to extend these problems.

Write a number sentence for each question. Then answer the question.

Try to find more than one way to solve this problem. Explain the different methods you find.

Write a number sentence for each question. Then answer the question.

Try to find more than one way to solve this problem. Explain the different methods you find.

D) Use fact-family reasoning to find values of n that make these mathematical sentences true. Then check your answers.

To find a quotient of decimals, you can think of the decimals as fraction.

Explicit CMP3 attention to the meaning of solving an inequality does not occur until Variables and Patterns.

Use variables to represent numbers and write expressions when solving a real-world or mathematical problem; understand that a variable can represent an unknown number, or, depending on the purpose at hand, any number in a specified set.

As indicated in the comments on Standard 2a, writing expressions and equations to represent conditions of real or purely mathematical questions occurs throughout the units of the CMP3 grade six course. Use of letter variables in such expressions occurs explicitly in the formulas of Covering and Surrounding and then throughout Variables and Patterns.

But there are also opportunities in other earlier units to extend numeric calculations and expressions by asking students for general expressions involving letter names for variables. For example, as noted in the remarks about Standards 6.EE.A.2a, 6.EE.A.3, and 6.EE.A.4, one can ask students to give general formulas for calculating sales tax or discounts when working with percents in Decimal Ops.

Solve real-world and mathematical problems by writing and solving equations of the form x + p = q and px = q for cases in which p, q and x are all nonnegative rational numbers.

Several CMP3 units develop student understanding and skill in work with these equations. The key idea in those earlier encounters with equation solving is fact families.

This use of fact families to solve one-step linear equations is developed and practiced in the Decimal Ops units. So students should have efficient and easy to recall strategies for solving x + p = q and px = q before they get to Variables and Patterns. Those early encounters with equation solving are generally embedded in the context of real world quantitative questions.

The common equation solving strategy that relies on the idea of maintaining the equality of both sides of an equation (add, subtract, multiply, or divide equals by equals) is developed and applied later in Variables and Patterns.

This standard is essentially asking students to learn how to think about variables as quantities and equations as representations of functions or relationships.

In problem 1.3 of Decimal Ops, students explore the concept of unit rate, in each example setting up a natural opportunity to study relationships between a dependent variable and an independent variable linked by an equation in the form d = rt, with the coefficient r as the unit rate. In those situations thinking about unit rates is a natural invitation to thinking about how one variable changes as another related variable changes.

The Madison Middle School Outdoor Club went on a three-day hiking trip in a national park. The club members made a table to show the distance traveled and time spent hiking for each of the three days.

How can you use the data above to compare the walking rates for each of the three days?

In Comparing Bits and Pieces, you learned about unit rates. You expressed each person's share of a chewy fruit worm as a unit rate. A unite rate is a comparison of two quantities in which one of the quantities being compared is 1 unit. In this Problem, you will use a calculator to find unit rates, such as the distance the hikers traveled per hour. You can express these unit rates in decimal form.