Prime Time and the CCSSM Algebra

This document compliments the paper, CCSSM Expressions and Equations in CMP3 Grade 6, and provides guidance for instances where students engage with the Algebra ideas in Prime Time. 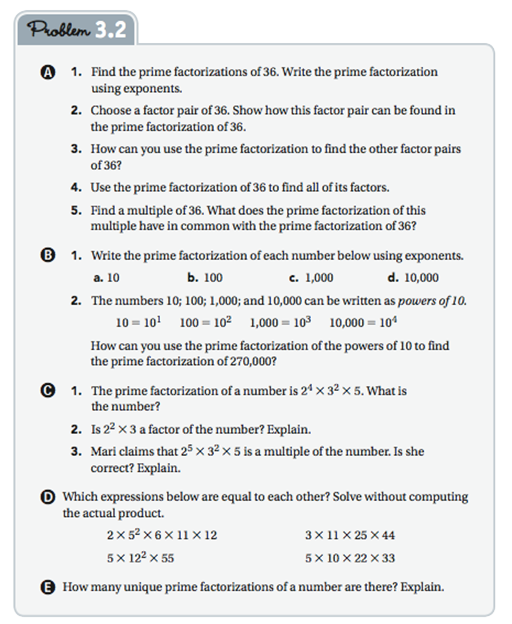 Writing numeric and symbolic expressions and sentences to represent the operations required to solve problems is one of the most important skills in applied mathematics. Each unit of CMP3 includes many activities that develop understanding and proficiency in work on such modeling tasks.

For instance, Problem 4.4 of Prime Time asks students to analyze five different word problem situations, to decide which operations are needed to solve the problems, and to write one or more expressions that represent those operations. For example:

Dan is selling fudge to raise money for the school band. Each box of fudge costs $8. One week he sells 15 boxes, and the next week he sells 17 boxes. How much money has Dan made at the end of the two weeks?

These exercises that involve writing expressions to record problem-solving operations result in number sentences like:

The mathematical vocabulary of sum, product, and factor are introduced early in the first sixth grade unit Prime Time and are used throughout the 6th grade CMP units.  In Problem 4.2, the discussion of the Distributive Property and associated mathematical models and symbols are used to help students understand the mathematical meaning of term.  For example:

What do you think? Are Lila and Alex correct? Explain why or why not? 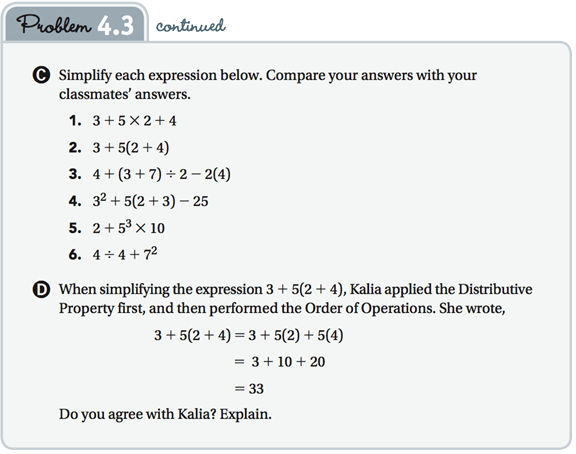 The fundamental concept of equivalent expressions is a big idea throughout the CMP curriculum. It is introduced in Investigation 4 of Prime Time where students focus on application of the distributive property of multiplication over addition to generate equivalent numeric expressions.

For example, in Prime Time Problem 4.2:

Each of the following numerical expressions represents the area of a rectangle that has been divided into two smaller rectangular pieces. For each expression,

In Prime Time Problem 4.3, students explore the Distributive Property and the Order of Operations, and the common misconception that you must always simplify within the parenthesis before multiplying.

When simplifying the expression 3 + 5(2 + 4), Kalia applied the Distributive Property first, and then performed the Order of Operations. She wrote,

Do you agree with Kalia? Explain.

For each of the following situations,

Dan is selling fudge to raise money for the school band. Each box of fudge costs $8. One week he sells 15 boxes, and the next week he sells 17 boxes. How much money has Dan made at the end of the two weeks?

The idea that equivalence means two expressions give the same outputs is first highlighted in Investigation 4 of Prime Time. Featuring applications of the distributive property, the most common principle for generating equivalent expressions, Problem 4.3 of that investigation states the property in generality with letter names for variables a(b + c) = a(b) + a(c).

Stephan's grandfather told him about how cicadas sometimes damage his orchard. One year, there were so many cicadas, they wrecked the buds on all of his young trees. Both the 13-year old and 17-year cicadas came up that year.

Students are engaged in solving equations many times in grade 6 CMP3 units.  For example, application and connection exercises in Investigation 4 of Prime Time ask students to “replace m with a whole number to make 7(4 + m) = 49 true” and “find whole number values of n so that 3(n + 2) is a multiple of 5.”  The intent of these problems is for students to informally reason using what they know of the order of operations and the distributive property to find the values of the variable that make the statements true.