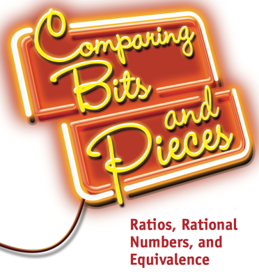 Significant Changes: New emphasis on ratio and unit rate and the comparison with equivalent fractions.

Comparing Bits and Pieces (formerly called Bits and Pieces I) has undergone substantial revision in response to the Common Core State Standards (CCSS). The major driving force of the revision has been the inclusion of ratio at sixth grade. While CCSS begins instruction in fraction equivalence at third grade, we have taken a stand these ideas are unlikely to be mastered at the beginning of sixth grade. Consequently, some work on equivalence is included but we have increased the complexity of the work in this unit to support the development of ratios and development of rational number operations in later units.

We have chosen to highlight differences between (1) fractions as numbers and part-whole relationships on the one hand, and (2) ratios as comparisons of numbers on the other. In this unit, students express ratios in three ways: with the language of for every, using the word to, and with colon notation and using per. The use of fraction notation to express ratios is not a goal of this unit, as it has the potential to make the distinction between fractions and ratios less clear. In the seventh grade units Stretching and Shrinking and Comparing and Scaling, students will incorporate fraction notation for expressing ratios and will explore ratios in more detail.

Ratios are introduced in Investigation 1 of this unit. The first problem involves comparisons of the fund-raising goals of different classes. The word ratio is introduced in the second problem and is used regularly throughout the unit after that point.

The final problem in the unit involves a new context intended to have students think about relationships among percents, ratios and fractions.

The use of number lines remains important in this version of Bits and Pieces I. We use the number line for equivalence, to represent improper fractions and for introducing other CCSS new to sixth grade: negative numbers, opposites, and absolute value. Once we have introduced negative rational numbers, we return to them frequently in the unit; especially when comparing and estimating with fractions and decimals so that students develop an informal sense of the size and location of these numbers.

As in CMP2, we continue to use area models for decimals. We have added a context-sharing a large pan of lasagna. The theme of fair sharing is an important one in this unit, and one that we have been more intentional about developing than in previous versions of Bits and Pieces I. In this spirit, we have restructured the disaster relief problem (Problem 3.5 in this version) to highlight fair sharing in ways that variously suggest fractions, decimals, ratio, and division in the different parts of the problem.

In CMP2, there was a single problem using percent bars. In CMP 3, most of the percent work uses percent bars as a tool for reasoning about estimating and computing percents.