Variables and Patterns: Focus on Algebra 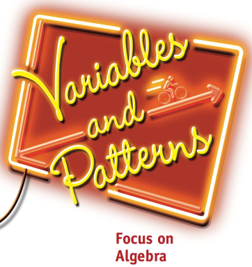 This unit was moved from 7th grade, so this is a new unit for 6th grade.

The new Common Core State Standards for Mathematics (CCSSM) describe quite specific objectives in algebra for grade six. While some introduction to algebra is done in Prime Time, Let’s be Rational, Covering and Surrounding, and Decimal Ops, the most natural way for CMP3 to respond to those enhanced expectations was to move a revised version of the Variables and Patterns unit from the beginning of grade seven to the end of grade six. The revision for CMP3includes some streamlining of the first three investigations (in part responding to CCSSM requirements that objectives like coordinate graphing be treated in earlier grades and units) and development of new material on order of operations, equivalent expressions, and solving equations that also responds to CCSSM requirements. The study of patterns of change between two variables and how these patterns are captured in verbal contexts, tables, graphs and equations are maintained from CMP2 and are also part of the CCSSM for 6th grade.

Investigation 1: This set of 4 problems begins the development of students’ ability and disposition to find relationships between variables and the representation of those relationships in tables and graphs and ‘stories.’ It focuses almost exclusively on change over time relationships, especially the fundamental connections between distance, rate, and time.

The major changes for CMP3 are:

The only significant change in CMP3 is introduction of problem 2.3 on four-quadrant graphing. This is included to satisfy CCSSM objective 6.NS.8.

Investigation 3: This investigation focuses attention on writing symbolic equations for relationships between two variables. It responds directly to the heavy CCSSM emphasis on expressing relationships in symbolic form, and it also deals explicitly with proportionality relationships of the y = mx type involving rates, another CCSSM requirement.

The major changes proposed for this investigation are:

Investigation 4: This investigation is a substantial replacement of the material in CMP2, reworked to address the heavy agenda of CCSSM objectives for equivalent expressions and solving equations and inequalities. It has five problems. While we still encourage students to use calculator- or computer-generated tables and graphs to study relationships and solve problems, we have deleted the explicit directions on how to use those tools. We are assuming that teachers can provide the ‘how to’ instruction without our including it in the student text.