Significant Changes Due to the CCSSM introduction of ratio and rates in 6th grade, the content of this unit has been combined into three investigation rather than 4.

CMP2’s Comparing and Scaling has been altered in response to several forces, some internal and some external. There is a cut back (now only 3 investigations) builds on foundational work in 6th grade Units (Comparing Bits & Pieces, Decimal Ops, and Variables & Patterns) and in 7th Grade Unit (Stretching & Shrinking). The internal motivation for change was a desire to more strongly connect to, and to more completely develop, the ideas and strategies initiated in CMP3 Stretching and Shrinking. In similar figures, internal ratios, such as length: width, and external ratios, such as side length X: corresponding side length Y, are constant. When students find a missing length in Stretching and Shrinking, they are solving a proportion; they may use a scale factor rather than set up a proportion, but the proportional reasoning is the same. By the end of CMP3 Stretching and Shrinking students will have a method of scaling a ratio up or down to find a missing quantity or by using equivalent ratios, which is an important strategy for solving any proportion. Learning to choose the scale factor efficiently, in similarity and other situations, is a refinement of this strategy. They also use equivalent ratios to find missing length.

In CMP3 Comparing and Scaling, students use proportional reasoning in contexts other than geometric contexts, and develop additional strategies for solving proportions, including efficient scaling and common denominators. They will see that rate tables are a variation on a scaling strategy, and that unit rates are particularly useful. In the example below, number of units of length of base of triangle: unit length of height of triangle = 1.5: 1. Using this unit rate is another way to solve the proportion 3:2 = x: 11. 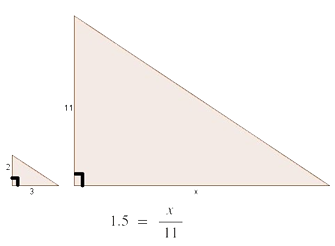