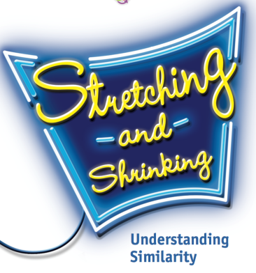 CMP 2 Stretching & Shrinking addresses the 7th grade Common Core State Standards for 7th grade for similarity and for proportional reasoning. It also promotes algebraic thinking with the use of algebraic rules to produce similar or non-similar figures. In the CCSS, the word similarity is not mentioned. Instead, CCSS ask students to create scale drawings and use these drawings to investigate the relationship between lengths, perimeter, and area of two scaled drawings. In this unit we use the words similar figures and scale drawings interchangeably.

Very little change has been made to the original content of this unit. The original five investigations have been arranged into four investigations. The fifth investigation in CMP 2 had three problems on finding indirect measurements. One of these problems has been transferred to Investigation 3 as an application for finding missing side lengths in similar triangles. One of the other two problems, which uses the shadow method, has been moved to the end of Investigation 3. The other problem, which uses mirrors, has been moved to the ACE. At this point in their mathematical understandings, students are ready to use ratios or equivalent fractions to find missing measurements. The number of investigations shrunk by one; the number of problems shrunk by one.