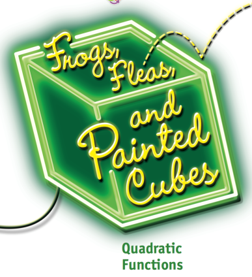 Minor Changes Some of the problems have been rearranged.

Investigation 1 is the same as CMP 2 with minor tweaking.

Problem 2.2 is a combination of the old Investigation 2.2 and 2.3. The distributive property has received more attention in grades 6 and 7 so we felt the development could move more quickly to multiplication of binomials. The distributive property is used to write equivalent quadratic expressions using the context of area of rectangles. Both cases, ax(x + b) and (ax + b)(cx + d), are addressed. The focus of 2.2 is on multiplying binomials or writing an expression in expanded form.

Problem 2.3 is the old 2.4 and focuses on factoring quadratic expressions.

Problem 2.4: The old 2.4 was replaced with a more hands on introduction to graphing quadratic functions. Students first graph quadratic functions when the quadratic expression representing the dependent variable is written in the form ax2 + bx + c and next when it is written in form (x+a)(x + d). They identify and predict special features of a quadratic function from its graph and equation. Intercepts and maximum/minimum are the main features. The line of symmetry is introduced.

The first three problems are the same with minor edits. Problem 3.2 is the old 4.3 At the suggestion of teachers Problem 4.3, Functions and Patterns of Change, was moved to this investigation.

This investigation is essentially the same except for 4.3, Pulling It All Together which was moved to Investigation 3.

Problem 4.4: This problem contains a set of cards each with clues such as a graph, table, equation, or information on intercepts or maximum/min. Students sort the cards into families and describe commonalities. They also write another equation that could fit the family and then identify one or more application that would fit with the family. This looks at quadratic, linear, exponential functions as well as inverse and simple cubic functions.